Also referred to as: How Not to Suck when playing in a PuG

Playing in groups is very different from playing solo. I see many Pick up Groups (PuGs) being formed, and the compositions that they end up with render them near-useless most of the time if there are actual other players to fight. While there are niche and fun tank or troll builds, there is no place for them in a (large) group that actually wants to win fights against other players when everyone follows basic group build guidelines.

Keep in mind that these recommendations are not intended for min/max groups, or guilds that build their own compositions. They are intended to help the masses of solo players who want to join groups and bring value to the group.

Some examples of healing builds that follow these guidelines are below along with my explanation of why the build in question has value, along with what can easily change in it to maintain value. The commonly valued sets in this slot are below, so please check who is already running one of these sets when you join a group, and fill in a set that is missing to bring a better composition to the group.

I don’t play many damage dealer roles these days, so won’t post screen shots of builds unless someone submits some! For damage dealers, you should be running either Vicious Death or Plaguebreak paired with a defensive set. If you’re confident in your survival – or in your healers, pair those with another damage set such as Dagon’s Dominion, War Maiden, Burning Spellweave, Dark Convergence, Mechanical Acuity, or others like those.

Managing all these builds can be a challenge, especially with multiple players (healers/supports) coming in and out of groups. I suggest using an addon such as Bandit’s Gear Manager to enable quick swapping of your sets. You can see in the below example, I have Spectre’s Eye and Kagrenac’s Hope sets on top with the same three body pieces and back bar sword & shield, and front bar Master’s Perfected Resto. Then there are three sets that fit into other slots so changing my active sets is as simple as clicking a button. 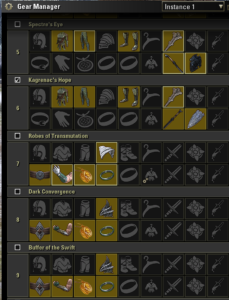