You could be the absolute best damage build in existence. You could kill thousands of opponents. Your bombs could generate enough ultimate from Combat Frenzy that you could chain them back to back and keep killing forever. The only problem is, you have a finite amount of health, and you won’t be able to do any of this if you’re dead. Too many bombers and DPS players seem to think that they are the be-all and end-all of PvP. Many don’t realize that they wouldn’t be able to do anything without the healers and support roles that keep them alive, keep them moving, keep them purged, and keep them buffed with a myriad of benefits.

Raid healing may seem simple, and I’ve heard many people say things like “get a set of Seducer and just spam heals”. In reality, raid healing takes more awareness, predictive assessment, better reaction times, exceptional positioning, and a higher degree of coordination than most damage roles. A group leader will call for ultimates or some damage skills, but rarely will a raid leader make healing related calls other than “big heals” or some variant thereof. Raid healers will need to coordinate their gear, their movement, their skills, their timing, their ultimates, and may not be able to take advantage of voice communications to do so (the purview of the group leader making calls).

In this guide / post, my intent is to give an overview of what different gear, skills, and styles should exist for Templar raid healers so that your group can better plan and optimize (min/max) how you’re going to keep your DPS and bombers alive. If you’re a solo player or a small group player, while the information here might be interesting it won’t apply significantly to your play style. Note that while the focus here is on Templars, other classes can be viable raid healers as well. The information presented here is also focused on the premise that the healers in group will be coordinated and will want to min/max as a group rather than as individuals.

Individual healers playing in a group (as opposed to the aforementioned coordinated healers) will often want to use a higher regen or sustain set rather than one that will complement the group (such as Shroud of the Lich or Alteration Mastery).

As a main 5-set, most Templars will be very happy using Kagrenac’s Hope. This set has been a staple for many years, and gives a bit of everything: health, magicka, magicka regen, spell damage and the always important speed resurrection. This set pairs very well with The Master’s Resto as you can keep a Kagrenac’s resto staff, dual wield swords or sword & shield on one bar (depending on your build), and use The Master’s Resto for Illustrious Healing to apply the resource regeneration buff on your back bar.

For a second 5-set (or choice of two if you won’t be using Kagrenac’s Hope), there are a few options as listed below. While this is not an exhaustive list of all the good possibilities, and there are a lot of niche builds for small man that are very different, these are the main sets that raid healers should be running:

There are a few other sets that could be of value to a group, though they tend to be more situational and depend on the conditions in which you’re playing. Note that Worm (magicka management for 12 players) and Sanctuary (increase healing received by 12% for 12 players) may seem healing relevant, they can be used and applied by any player. Only healers can apply heal proc set effects, so these should be used by non-healers if they are needed in group.

The monster 2-set completing the healer’s gear list could be Bogdan the Nightflame, Earthgore, Symphony, Troll King, or others that provide value to the group – rather than damage. Many healers in 5 light armour prefer Blood Spawn for the added defence stats (during proc) and ultimate return. Earthgore may seem like the best choice for its ability to remove ground effects (including ultimates), but keep in mind that multiple Earthgore procs at the same time won’t give much benefit. Two or three Earthgores in the group is enough.

On the topic of armour, most (if not all) healers (and magicka DPS) should use 5 light armour, one medium, and one heavy. If the sets you’re using support it (Kagrenac’s Hope does as it’s a crafted set), the chest piece should be heavy (as it gives the most armour) and one of the head, pants, boots or shoulders should be medium. Note that the belt gives the least armour so should always be light, and the gloves give second to least armour (so in 5 heavy builds the belt should be light and gloves medium to min/max defensive stats). The value that a group build gets from the light armour passives far outweighs the defensive stats that heavy brings. You may be 1-shot ganked, but remember that your build and group comp is meant to fight other groups, not chase one or two gankers or tower humpers.

If you feel that you need more survivability, then I suggest using a defensive set as your jewelry/weapons rather than changing to 5 heavy armour. You can enchant and transmute your jewelry and maintain the levels of regen, cost reduction, and spell damage that you need while gaining some survivability and keeping one of the group healing sets discussed earlier.

I’m a firm believer in all pieces having tri-stat enchants. If you’re low on gold, then put tri-stat enchants on your major pieces (head / chest / legs), and the trait that you need most (probably magicka) on your minor pieces. Your goal for resources between gear set bonuses, enchants, and character points should be about 28k health, at least 32k magicka, and 16k stamina. My preference for stamina is to have enough to break free, dodge roll, sprint for 2 seconds (to be back in your position in the group), and be able to break free again just in case. Considering that magicka Templars tend to have low stamina regen, about 16k is the right amount to cover this.

The jewelry enchants that will probably be best for most healers are two magicka regen and one magicka cost reduction, though there are some builds where three magicka regen are best, and others where one magicka regen, one magicka cost reduction, and one spell damage are best. As a healer, you need to know how each of the skills that you use are affected by your spell damage vs maximum magicka (how much more healing or damage they do), and get a feel for how your group requires heals. If you tend to continuously spam spells, cost reduction is advantageous. If you have some delay in between casts and you have more casting down time then regen is likely best. There is no one true way, and each player needs to determine what is most efficient for their role and responsibilities. If you’re the type who doesn’t want to think about it and just wants to run something “good”, then go two regen and one cost reduction.

The trait on at least two of your jewelry should be Swift. While DPS builds can get away with using a Ring of the Wild Hunt or another mythic item, your best value as a healer is the ability to proc healing sets, so you shouldn’t break those sets if possible.

One of your bars will need to be a resto staff. As to which resto staff you should run, the most likely options to synergize with your builds are as follows:

Your other bar may be a sword and shield, two swords, a destro staff (probably lightning), or a second resto staff. Here’s the comparison:

Most healers should be running powered weapons in most groups. Precise for critical strike chance and Nirn for spell damage could work for some niche builds.

Rounding out stats on your healer will be your Mundus stone. My preference is The Atronach for magicka recovery (letting me change a ring’s regen enchant which are more easily swapped as needed during a raid). The Ritual for increased healing is likely the most efficient if your build and play style has sufficient magicka management. Other viable options could be The Mage for maximum magicka, or The Apprentice for increased Spell Damage.

Once you’ve worked out which sets you’re going to use, gotten your equipment, gotten the right traits on everything (Impenetrable on armour with few exceptions and Powered on weapons with few exceptions), you will need to determine which skills to use. Depending on how many healers you have in group, you should be able to determine if you’re going to need to spend most of your time spamming healing, or if you’ll be able to cast many other skills as well.

Your champion point setup may be different depending on your role, your group composition, and if you want to be lazy and have one setup that works for both healing and DPS. You can see my current (2020/Q3) preferred setup in the screen shot below, along with a sample build for raid healing. 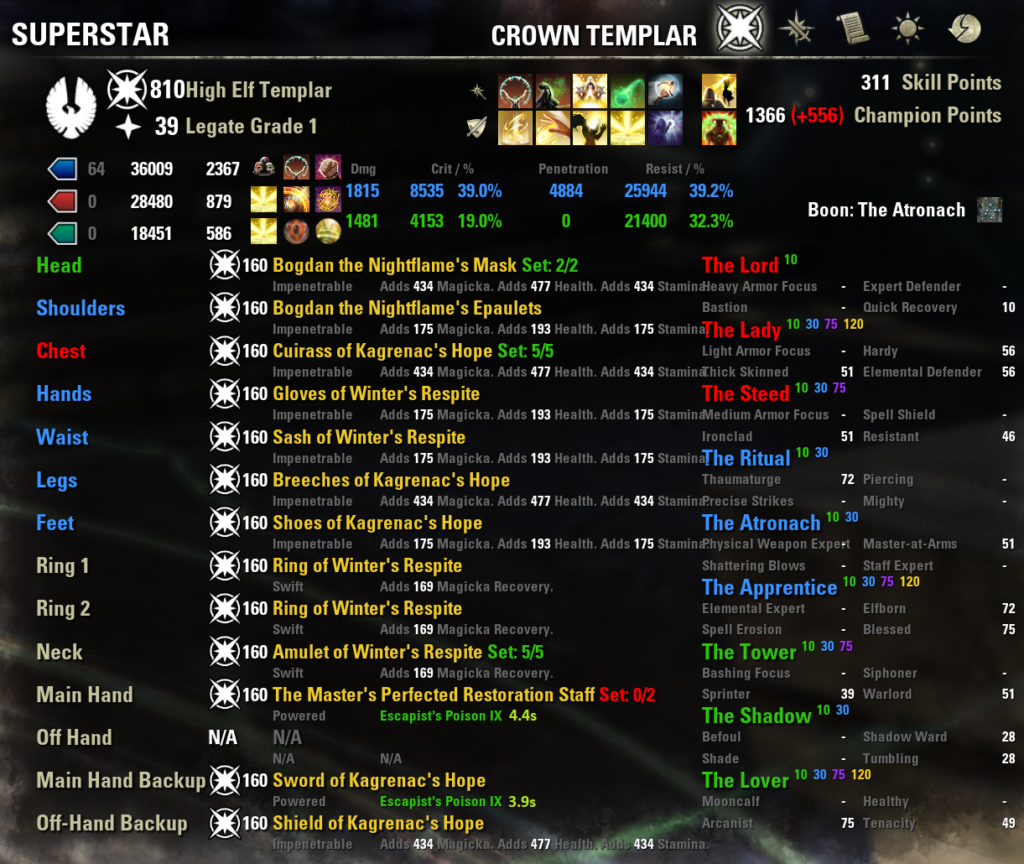