I’d like to explain more about feeding or AP boosting. The simple explanation of the term(s) is the scenario where you have players from another faction come and allow you to kill them repeatedly to make AP. If they die on a resource and you get the defence tick, you get the same amount of AP for killing them from the tick. If they die on a fully leveled-up keep (as of 2019/Q2), then you get five times the amount of AP you made for killing them from the tick.

Keep in mind that a player’s AP value when killed resets after five minutes, and they’re worth less AP until that five minute mark has been reached. I believe that the increase from being worth zero AP one second at the time of resurrection to being worth full AP after five minutes is linear, though have never tested that. In order to optimize feeding, there will be a five-minute delay in between when the player being fed will make their AP, and this is easily noticed by those who are looking for it.

In order to identify someone who is being fed, the easiest method is to look at the leader board. If their score increases with a very consistent amount of AP every five minutes, then it’s possible that they are being fed. It’s also possible that they are in a big fight that keeps going on (we’ve seen fights last for hours where both factions keep coming back), or they may be using some over-performing skills (I’ll get into that later on). Other possibilities include players duelling, players testing skills, players testing AP returns after a patch, though in most situations it will be someone being fed.

A simple way to identify a potential feeding location is to look for small swords on the map in an area that wouldn’t otherwise make sense. They look like this:

and will appear whenever more than two players are killed within 30 seconds in a certain range. If they only appear every five minutes, then the likelihood is high that someone is being fed or boosted.

Here is the starting leader board positions. I was playing my warden [email protected], and the Adrestia guild group wanted to push one of their members One Chaturbate [email protected] up to get emperor. You’ll note that we’re both in the mid/high 900k area. 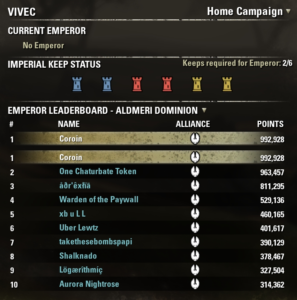 A direct correlation between 75k ticks at Blackboot and Soviet’s increases was identified. 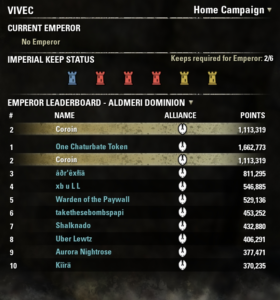 I took a transit shrine from Roebeck where we had just taken back the farm to Blackboot, and repaired a wall making 86 AP. Seconds later, I got a tick for 38,174 AP. This number is almost exactly half of what Soviet’s leader board increases were every five minutes: 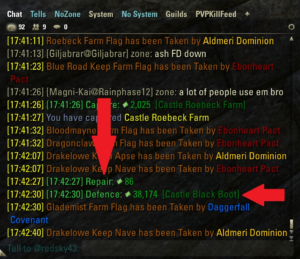 You can then see in the next leader board update that Soviet increased by exactly that amount (38,174 AP), and I increased by that same amount + 86 AP (which I got for the wall repair). 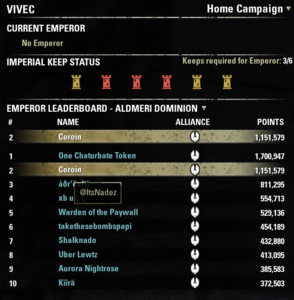 From the beginning in the 900k range, about one hour passed where Soviet increased by about 75k per five minutes except for the four periods where I stole half his ticks. In those four periods, he increased by the same amount as I did (around 38k excluding the 86 AP wall repairs). In some updates, he didn’t wait the full five minutes and made about 70k, with the largest update being 78k, which was probably a perfect five minute wait between the time that his guild mates resurrected each other and when he killed them again.

It looked like they would continue feeding / boosting AP regardless of my stealing half their ticks, so we went to interrupt them near Blackboot mine where we saw the small swords appear: 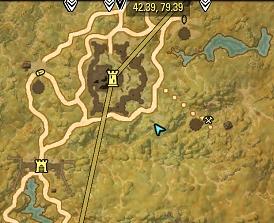 By this point, Soviet had made about 789k AP in that hour, as can be seen on this leader board screen shot: 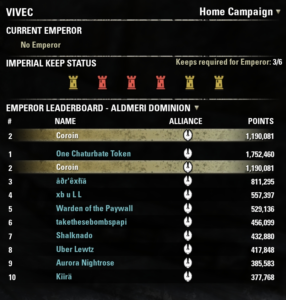 Once they were located and interrupted, the players feeding scattered and logged back into their AD toons. It’s interesting to note that they claim to have all been playing together fighting “normally” the whole time, yet Soviet is the only one who made any AP during the period.

This was the Adrestia group about five minutes after they were interrupted when they went back to their AD characters: 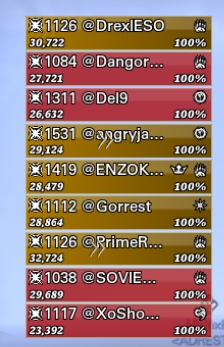 It is important to note that feeding and AP boosting is not against the Terms of Service, the EULA, or the Code of Conduct, but it is seriously frowned upon by the community and many people consider it “cheating”.

To our knowledge, this is the only paragraph that can be relevant to these activities, though ZOS’ interpretation of said paragraph is only related to the use of cheating programs and hardware – and not activities taken by players without any of these types of cheating mechanisms.

If you’re considering being fed AP, then keep the following in mind:

I posted the below on 2019/05/14 in Discord explaining my position on this event:

Yesterday someone was caught with their guild feeding them to top the AD Vivec leader boards. I’d like to make my position clear on that, as there have been quite a few arguments on the matter.

My issue with this is case of balance, where everyone has an opportunity with the same potential.

The players / guild who were feeding are good players, and are probably all among the top 5% of PvP players in the game in terms of skill. They have the skills to make top AP. There’s no need for them to play unethically (subjective statement).

Regarding other types of activities that make more AP than is expected with normal fighting (this point was brought up by one of them that other people do or did these in the past so it’s ok for them to feed):

If you feed, you’re unleveling the playing field and it becomes a question of resources, which we measure in time, money, and people:

None of the above feeding scenarios are against the Terms of Service, EULA, or Code of Conduct. ZOS have made their position clearly known that the players can do what they want, and if they want to role-play killing each other, they are welcome to do so. Many people talk about players policing themselves, though we all know that’s not going to happen. There’s very little that we can do to stop feeding, and I’ve always argued vehemently against feeding because it messes up the balance of the boards.

That’s the summary of my position. If you want to feed for emperor, you can go right ahead, but I’m going to clearly state that I believe that it’s a shitty thing to do.

Regarding the allegation that I myself use over performing skills to make more AP, I freely admit that, and some may call me a hypocrite for such. The techniques and methodologies that I use to find those skills and determine their performance for AP percentage returns were also made public as well as the use of synergies, applying debuffs, and spamming skills like Inevitable Detonation when running solo to get very high returns on other players’ efforts killing (best when I’m on AD and I throw them out at DC vs. EP fights).

Some people disagree with using them, and they’re entitled to their opinion. Bug reports were made for every skill and set that we believe is over or under performing, and it’s on the ZOS development team to change these things if they want to. If they want to declare something “an exploit” as they did gap closing over non-contiguous ground until they changed their code, they are entitled to do that. If they declare something an exploit, then we will obviously not use it – though we may argue with them. Until and unless they explicitly state that “using the altar skill when you are solo and there are other players around you is an exploit”, I fully intend to keep using altars on the Alessia bridge until they change how that skill works. Incidentally we’ve tested on PTS, and it looks like AP percentage returns are being much better balanced in the Necromancer update (2019/05/20).

In my opinion, and you are welcome to disagree (as I’m sure many of you do), there is a very big difference between:

In ZOS’ opinion they are both acceptable practice. If you as a player disagree, again, you’re entitled to your opinion. The ToS allow for all of this, and it’s on each player to determine their own code of ethics.

A very simple method for ZOS to address these types of situations would be to eliminate any AP that one player gets from killing another if there have not been any other players who made AP off of the killed player in a subsequent kill/death. If you are against feeding, suggest this or something like this to ZOS. If you have other ideas on how to combat feeding, please feel free to let me know the details, and I’ll add them here and suggest them to ZOS myself.