Healing as a stamina warden is both simpler and more challenging than healing as a templar. Your kit is smaller with only a select few healing spells, and you have to keep more independent buffs up, but you make up for it with a level of burst healing that a templar can only output in some specific circumstances with builds that have among the highest of skill caps.

Your front bar needs to be two daggers, as the Dual Wield passive Twin Blade and Blunt for daggers increases your critical strike chance.

Your back bar will be a bow if you’re using Bombard, or a 2H Maul (Master’s, perfected preferred) if using Carve. See the section on the back bar’s skills for that decision.

I recommend the Swift trait on at least two of your three jewelry to ensure that you have the speed to maintain appropriate positioning outside the group for better coverage of Soothing Spores.

Bewitched Sugar Skulls is likely the best choice for food, as it provides all three stats with some health regen.

Potion preferences are up to the individual, though the staple Health/Stamina/Immovable and Health/Lingering Health/Invisibility as well as something with Minor Heroism (for ultimate regen) are nice to keep slotted.

The front bar skills that are most appropriate are as follows:

Your back bar has one variable slot that will usually either be Bombard or Carve, then the rest are utility and buffs:

You can see my suggested champion points for this build in the screen capture below. This CP layout is meant for high healing with some damage capability as well. 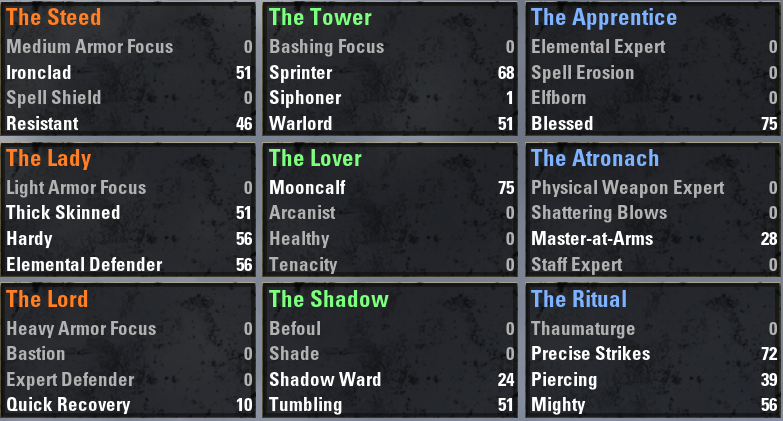